What. A. Weekend.  It was so fun and exciting and exhausting and fascinating!

I don’t even know where to begin, it was that good.  So I could keep continuing on with my rambling and keeping you in suspense (What did she do?  What did she see? How many weirdos did she encounter?), but I suppose I’ll jump right in to this unnecessarily detailed post.  Also, because some famous people live in NYC (such as Taylor Swift), I’m going to pretend that I’m famous and that someone is conducting an interview with me, because I like to pretend I’d be important enough for that.

I’m a College Kid: So Kasey, we hear you went to New York this weekend and we’d love to hear all about it.  Mind if we ask you a few questions?

Kasey: I don’t mind at all! I’m flattered that you’re interested and would love to tell you all about it.

IaCK: That’s very gracious of you, we know how busy you are.  First: why did you go to NYC?

K: My dear friend Chloe has been in New York for almost a month now for a fashion/design internship.  My other dear friend, Katie, and I decided to go up there for a long weekend to visit her!  We stayed at her apartment for the weekend and packed a lot in to a few days!

K: Only the coolest apartment I’ve ever seen in my life. It was in a former cork factory in Brooklyn and it was nice and big and open with exposed brick–my favorite!  It was 2 bedrooms and she and 5 other girls from Oklahoma State are sharing it for the summer. The apartment was beautiful and all her roommates were super cool and very welcoming of us.

IaCK: So what did you do on Thursday?


K: I drove up to O’Hare after work on Thursday and met up with Katie for our flight.  By the time we landed in LaGuardia and took a cab to Chloe’s, it was after midnight and we were pooped! We met one of Chloe’s roommates (the rest were asleep) and set up our sleeping bags and blankets and fell asleep.

K: We were up and at ’em early on Friday morning because Katie and I went to see Jason Derulo perform in Central Park for Good Morning America!  We took the subway to get there, and thank goodness for Katie and Chloe’s iPhones and the app “HopStop” because we got there without a hitch. When we got to Central Park around 8 or 8:30, we were pretty close to the stage and could see Jason very well!  We were also on TV for a little while!  Katie and I wandered around the park for awhile (there were so many babies and small children) and ate some delicious muffins at a place called Sunberry Cafe while we waited for Chloe to get off work.  When she was done, she met us near the park and we ate lunch at another little cafe called E.A.T. We walked around a couple little shops and then headed back to hang out at the apartment for a little while.

That night, we met up with the rest of Chloe’s roommates at a restaurant in Chinatown and ate dinner.  We had wanted to go out that night too, but we realized we were going to be way too exhausted, so we ended up going back to the apartment and crashing by like 10:30 (we all got to share the big king bed that night) and didn’t wake up until after 9 the next day. 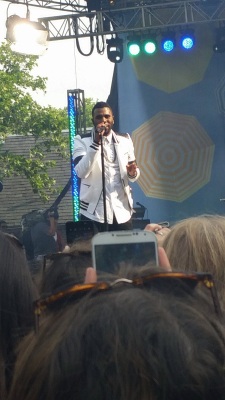 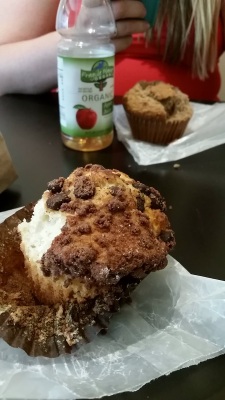 IaCK: Sounds pretty crazy!  What was your Saturday like?

K: After sleeping in pretty late, we forced ourselves out of bed so we could go to this doughnut shop Chloe and her roommates were obsessed with. Here I am, thinking, “What’s the big deal? It’s just doughnuts,” and limping along with the blisters from yesterday. Little did I know, my life was about to change.

The place was called Peter Pan and let me tell you, THEY HAVE THE BEST DOUGHNUTS IN THE WORLD.  I will shout it from the rooftops and I don’t care who thinks I’m crazy (I know Katie does).  They tasted so freaking delicious and they were so cheap!  I will list the ones I had all weekend below and will only feel semi-ashamed:

That’s right, people, I ate a ton of doughnuts, but whatever, it happens.
IaCK: Okay then…I guess you really liked those doughnuts, huh? *Nervous laugh.* What else did you do that day?
K: We went back to Chloe’s apartment and hung around and laid in bed and watched Vines for most of the afternoon because we were too tired from the previous day’s festivities. We went to a place called Vinny’s pizza for lunch where I got a slice of pizza with macaroni and cheese, bacon, and sour cream and it was muy delicioso.  We watched some American Ninja Warrior with one of Chloe’s roomies, and then we got ready so we could make our reservation at Beauty & Essex. We took the subway, and unfortunately it broke down due to electrical issues.  We scrambled off and luckily this super friendly guy pointed us in the right direction to make it to the next train, so even though we were a little late, we finally made it! The restaurant was a speakeasy during prohibition, so the entrance is a functioning pawn shop, and then you go through the door in the wall to get to the actual restaurant.  It was really nifty and posh!  The food was tapas style (not ‘topless’ as we heard it) so it was little appetizers and things meant to share.  Katie and I shared these tomato, bacon, cheese dumplings (party in my mouth) and lobster mac n cheese.  I also got this Elvis Presley sundae for dessert (which also had bacon, and I am only now realizing how much bacon I actually ate that day).  The best part?  Free champagne (champs) in the bathroom!  Woohoo!
When we left the restaurant, Katie, Chloe and I headed over to Time’s Square to see it at night.  It was packed!  We took some touristy pictures, walked by Chloe’s work building, and walked around the 4 story Forever XXI store.  Then we made our way back to Brooklyn to a very hipster bar called Spritzenhous where everyone was playing Jenga (??).  It was super cute with all these little lights and stuff around the room, and I also found out I like strawberry beer.  It was great getting to talk with the girls and hang out with them.  We went to McDonald’s for some late night food after that (a McDonald’s without a drive-thru…what a strange concept) and then headed back home to sleep.

We are the 3 best friends that anyone could have… 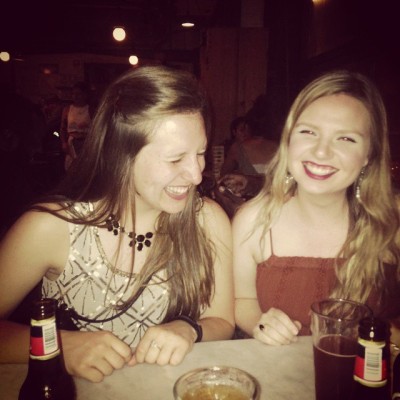 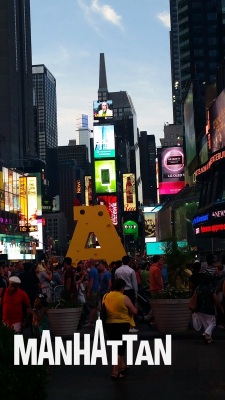 K: On Sunday we got more doughnuts and then went to the American Museum of Natural History.  We walked around for a couple hours looking at some cool stuff (like a giant whale hanging from the ceiling) and Katie made a hilarious tourist video at a little stand in the museum too. We stopped for even more doughnuts on the way home, and once we got back, Katie and I had to leave to catch our flight.  By the time we landed in Chicago and I drove back to West Lafayette, it was already past midnight and I had to work at 7 the next morning!  Seriously, it was such an incredible weekend though.  I am so in love with that city and I loved getting to share it with some of my favorite people!

Stuck on the tarmac in Chicago–no open gates

K: I’d just like to give a shoutout to Katie for coming up with some awesome ideas for what to do while in New York and being so organized.  You are an awesome travel partner!  Also, shoutout to Chloe for letting us stay with you and taking us to all the cool places.  I am so proud of you for your success so far in NYC and can’t wait to see you again! Also, my apologies to all my readers who are puking at the though of all the food I ate this weekend, but hey, when you’re in New York and are walking over 30,000 steps a day, I think it’s pretty justifiable 😉

**Read the full interview in no magazine, hitting stands never.