Hey again, everyone!  Just when you thought you wouldn’t have to read another post for awhile, I’m back at it to chronicle the events I skipped over in order to write this post.  Because the last one was so long, I’ll try to keep this one short and sweet.

Toledo
A couple weekends ago, I went on a day trip to Toledo, Spain through a program called City Life Madrid.  I was supposed to go with my friend Sam, but she was feeling pretty sick and couldn’t make it.  So of course I was freaking out about going by myself (remember, this is before I gained confidence traveling solo from Porto).  But there was no need to worry because I met 3 awesome chicas also on the trip and we had a great time!  We enjoyed the tour exploring the ancient streets and admiring the architecture.  It looked very medieval and has Christian, Muslim, and Jewish influences.  We even rode the zipline, which was super fun, and the views were amazing! 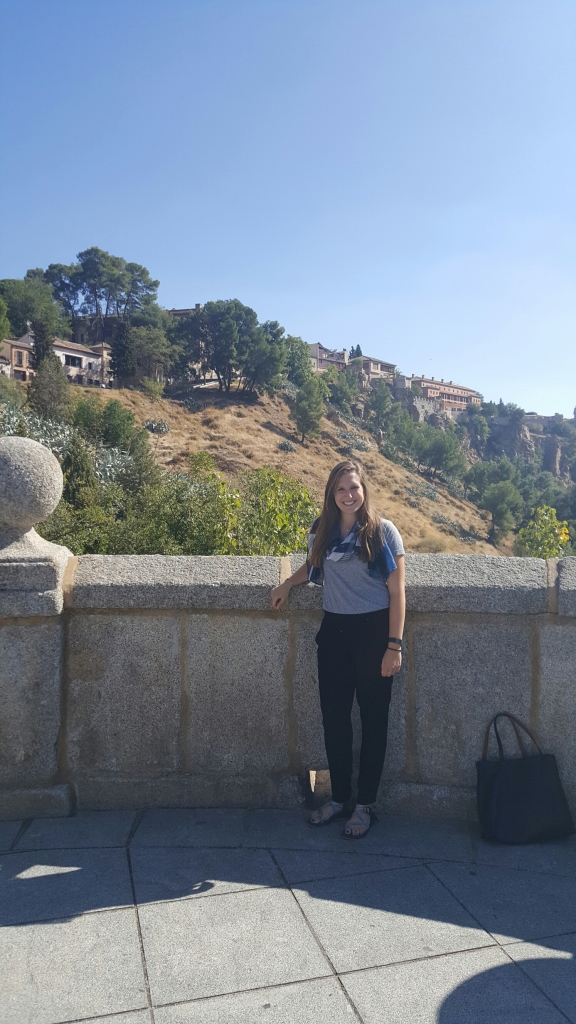 Tren de la Fresa & Aranjuez
The next adventure was going to Aranjuez on an old-fashioned train called the Tren de la Fresa!  Minorka and I enjoyed the ride by eating the strawberries (fresas) they gave us and then had a blast exploring the city of Aranjuez.  It. Was. Gorgeous.  We toured the royal gardens and even took a boat ride while sipping sangria.  The trees, fountains, flowers, and weather were all beautiful.  It was a lot of fun! 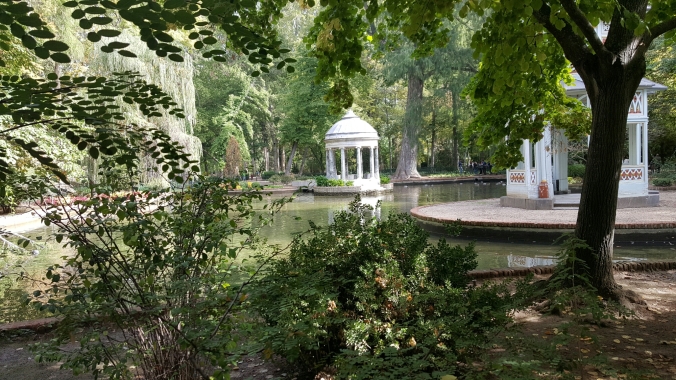 Hiking
Am I an avid hiker, prepared with hiking boots, a walking stick, and a good understanding of trails?  Heck no.  So naturally, I decided to do a 16k hike with Minorka and her friend Carolina in Miraflores de la Sierra with a group  called Hiking Madrid.  It kicked our butts.  There were steep areas with rocks, streams we had to cross, and cow poop to maneuver.  But it was gorgeous!  It was a lot of fun and we had a lot of laughs at how out of shape we were compared to the other hikers.  The best part (besides the gorgeous views) was that we got peanut butter and jelly sandwiches for lunch, which I have been craving like nobody’s business.  Leave it to me to think the best part was the food…  We decided we really needed to get into hiking so we could have an excuse to buy legit hiking boots, because they’re pretty cheap here. 😉 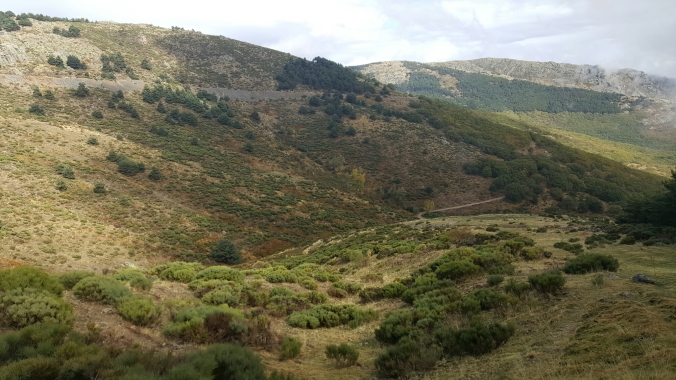 Lol, had to take this pic because of the leaves!

Halloween
Ohhh man.  You would not believe how into Halloween the kids at my school are.  Well, I guess just the school in general!  The Friday before Halloween, the entire day was dedicated to Halloween activities.  I’m talking spooky games, activities, and even a “horror tunnel” where the teachers dressed up and scared the students!  All the kids had on their costumes and elaborate face makeup and were so excited all day!  It was really cute.  Plus, all the teachers dressed up as Ghostbusters characters, so I was the Stay Puft marshmallow monster!  It was really fun and cute, but also really exhausting, lol. 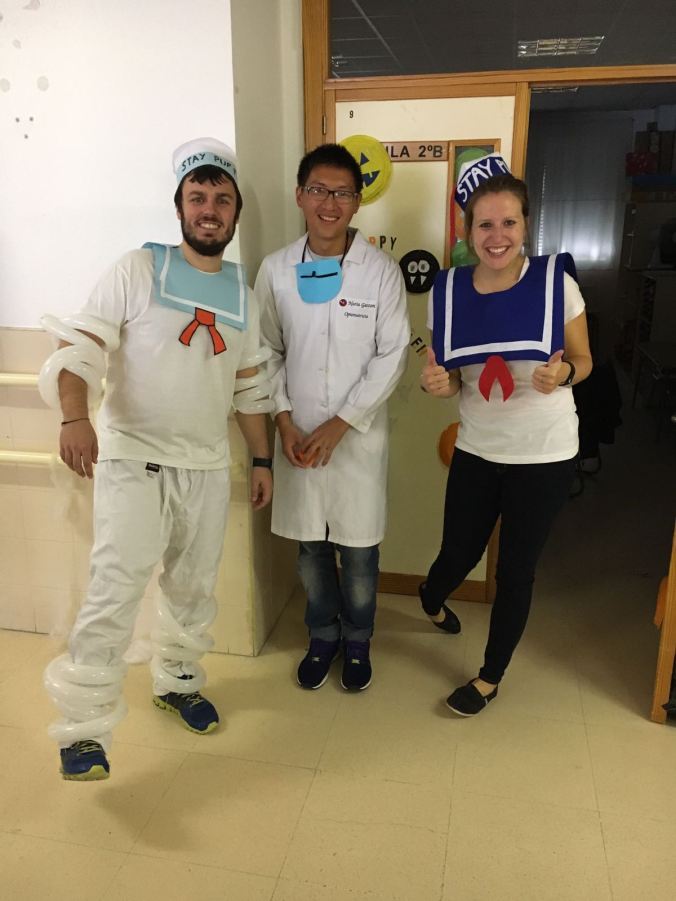 Making Pumpkin Bread
Okay, if you’ve been keeping up with the blog, you know how much I miss the Fall and all that comes with it.  My favorite Fall food is pumpkin bread, so I decided I had to make some.  I bought some canned pumpkin, measuring devices, and baking soda (they don’t bake with baking soda in Spain?) at the Taste of America store (hallelujah for that store) and had my mom send me her delicious recipe.  Well, I followed all the instructions as best as I could, but unfortunately…it did not turn out as expected.  I don’t know if the oven temperature conversion was wrong when I did it online, but those stupid loaves charred on top and were a gooey mess on the inside.  I was so upset and couldn’t help but tear up because I had been so excited for a taste of home.  However, determined to make the most of it, I cut off the top and managed to salvage the middle portion of the loaves.  I brought it in to school so my fellow auxiliares could try it (they had never had it and always made fun of me for how much I talked about it) and they loved it!  So even though it didn’t go as planned, it was still delicious.  Even my host mom liked it!

Hanging with the Auxiliares
Okay, I can’t write another post without mentioning the awesome coworkers I have (mostly because Lauren has been dying to be mentioned in the blog, lol).  Two of the ladies I’ve gotten closest with are Selena and Lauren.  Selena is from Puerto Rico and is super cool and chill.  She is a very “go with the flow” type person, which is the exact opposite of me, but we get along well.  Lauren is from England and she and I make fun of each other’s accents and differences in our English, which gets hilarious sometimes.  We’ve all hung out a few times outside of school, including going to Tapapiés, a food festival in the Lavapies area where the restaurants each have a tapa and you try to go to as many places as possible.  I really enjoy spending time with them (and complaining about school with them!).  I’m lucky to work with some cool people.

In other news, this last weekend was my youngest host sister’s birthday (she turned 6), so my host mom threw her a Little Red Riding Hood birthday party, and it was so cute!  There were about 15 little girls dressed in red capes and hoods running around and the decorations were phenomenal.  It was really cool to be a part of!

Alright, so that post was a little longer than I anticipated, but you can’t expect much else from me.  I hope everyone has an amazing week and enjoys the last of the Fall weather before it gets too cold!