The York BBQ was really fun!  Riding in the Boilermaker Special was the shizznazzzz. For those of you who don’t know, the Boilermaker Special is our mascot.  Yes, our mascot is a train.  So stick that in your juicebox and suck it.  I mean lesbehonest..can you say you are able to ride in your mascot?  Didn’t think so.  My floor, 4 East, and the guys’ side, 4 West, (or as they like to call it, DeltaFourth) played a big game of Catch Phrase while we waited for our turn to ride.  The ride there was awkward because we were all crammed in together and nobody knew each other that well.  The ride back was 10x better.  The song, “Livin’ on a Prayer” came on, and we all jammed out, hair blowing in the wind and everything.  It was like one of those ’80s montages of a group of friends having fun in a convertible together…except we were in a train.  Which again, is just awesome.
Anyways, we ate like kings at Dr. York’s house.  The cheeseburgers were absolutely phenomenal, as was the fruit and…wait for it…the home-made macaroni and cheese!  Yep, what a feast.  But who could forget about the dessert?  Brownies and cupcakes and ice cream, oh my!  Point of interest: Dr. York keeps bees.  He pulled out one of the honeycombs and let us eat honey straight from it.  It was so sweet and delicious.  This guy is legit.

The girls ready to go to Dr. York’s house–we were imitating how the guys took their picture.  We totally pulled it off…

Annie, me, Julia, and Hannah! 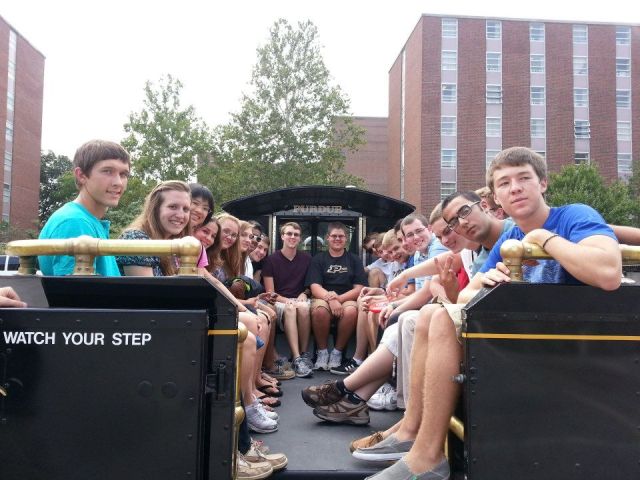 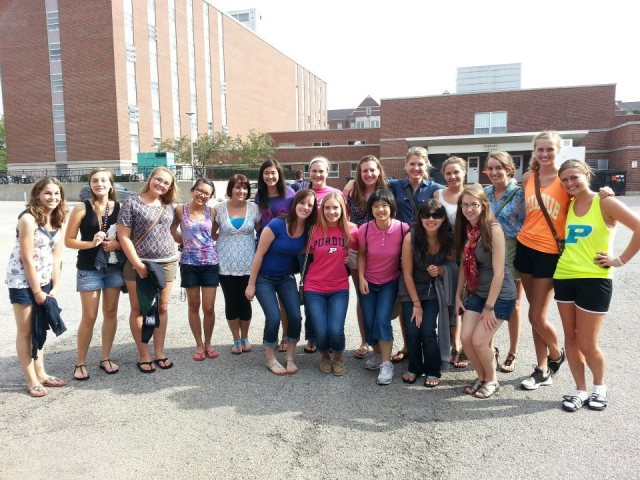 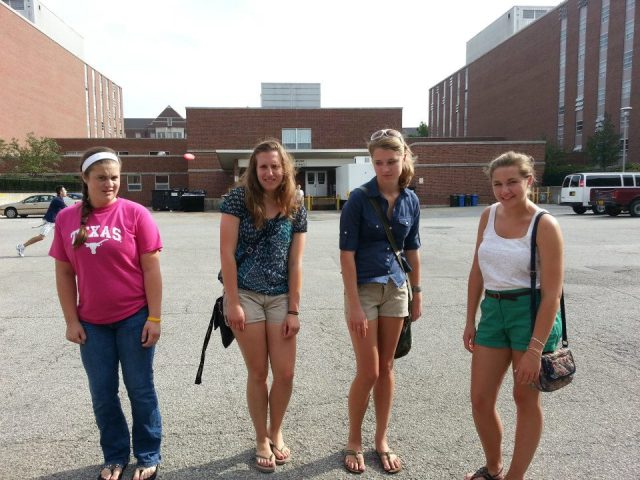 I can’t even remember what night this happened, but I’m pretty sure it was Monday because we hadn’t run out of energy from the weekend yet.  My friend and next-door neighbor, Alyssa, and I got back from class and were just feeling a little crazy.  So, before anybody knew what we were doing, ourselves included, we had donned sweatpants that we hiked up to our chests, piled our hair on top of our heads, and got our bath towels which we wrapped around our necks like capes.  We each started at opposite ends of our hallway, and on the count of three, we sprinted to the other end and back, high-fiving in the middle.  Though we weren’t making much noise, before we knew it, heads started poking out of rooms to see what the commotion was.  Between gasping for air and laughing hysterically, we told them about the race we just completed.  Suddenly, a challenge was issued to us: run to opposite ends of the hallway, sprint up the stairs to the 8th floor (we’re on the 4th), sprint down to the opposite stairwell, and sprint down and back to the beginning.  Well Alyssa and I were not about to back down from this challenge, so we did it and were both dying by the time we were halfway up the stairs.  But we finished it, and I lost…by a lot.  Oh well.  We had a lot of supporters waiting for us at the finish line, so it was just a good time.

Alyssa and I, pre-race. 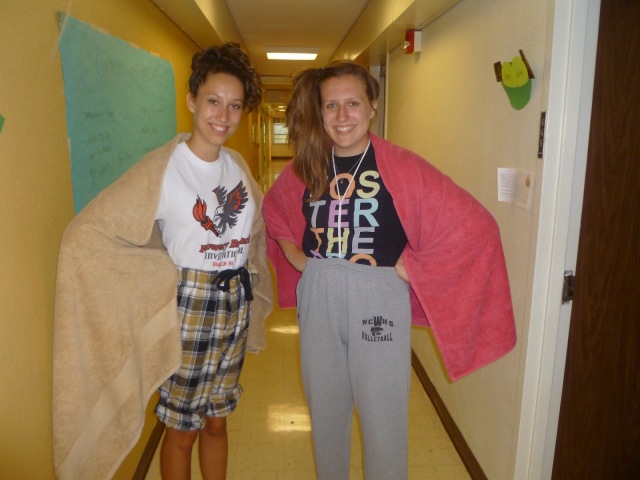 Well obviously we weren’t about to do homework after that, so me, Alyssa, and our two friends and floormates Julia and Lilly all got on the elevator and proceeded to reenact a birthing scene.  I have no idea where this came from, but we ended up stopping on every floor and getting strange looks from people.  Then we decided to have all four of us stand in a straight line across the door of the elevator, and every time the door opened, we stared straight at the people trying to get on and didn’t move to let them on.  They looked so confused and one girl even asked, “Can I use the elevator?” in a shy, timid voice.  After a couple seconds of this staring, we ended up just bursting out laughing and letting them on.  Except there were some girls who had absolutely no sense of humor and thought we were the craziest people in the world.  Sorry we like to have fun…  But this fun ended when Lilly accidentally pressed the help alarm in the elevator and it started ringing.  In a panic, we dashed out of the elevator laughing our heads off.  Our RA, Leigh, thought it was funny too.  She didn’t even get us into trouble or anything…best RA ever! 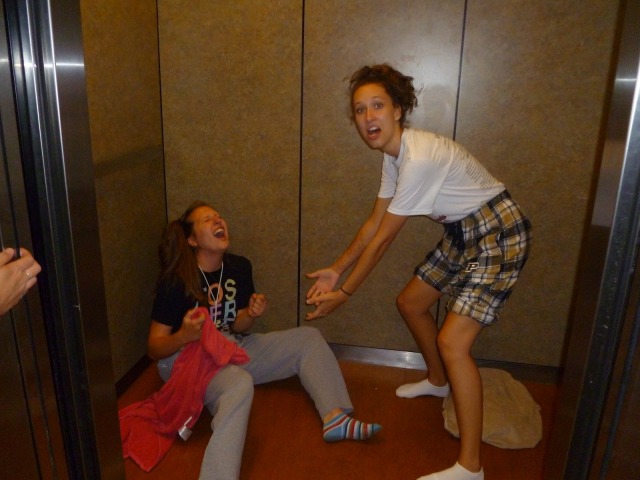 On a sad note, Neil Armstrong, first man on the moon and student of Purdue University, passed away last week, so Purdue held a memorial service for him in front of the engineering building named after him with the statue of him out front.  There were so many students there!  There were some speakers, but some of my friends and I got there kind of late and we couldn’t hear much, so we ended up leaving before it was over.  I wish I had a picture, but there were soooo many bouquets of flowers on Neil’s statue from students on campus.  Seriously though, I love this school.  How awesome is that?  And people say college kids don’t care about anything but partying…

Huzzah, Brooke and I were both voted floor senators!  We now represent our floor and have to attend all the Shreve Club meetings and act as the liaisons between Club and floor.  It was pretty cool to know that we have already formed a network of people here who respect us and think of us as leaders.  If only they all knew about my hallway races dressed like a nerd…

As much as Purdue as a whole is fun, the school aspect is already not fun.  This past week I’ve been running frantically between buildings getting signatures from professors and advisers for my honors contracts and staying up late trying to revise them to make them fit the Honors College and professors’ requirements.  It was so stressful, but I was finally able to turn everything in today, which was the due-date.  Procrastination at its finest.

Another outstanding thing that happened this week was that Megan went to fill up the giant water jug we keep in our fridge earlier this week.  It was late when she did it, so when we woke up in the morning, our floor around the fridge and our food drawers was sopping wet.  Upon opening the fridge, we found out that she hadn’t closed the lid properly and the water had leaked all through our fridge and spread across our lovely carpet.  Let the panic ensue.  Okay just kidding.  We’re college kids and we can totally handle this situation.  We mopped up the water with some paper towels and pulled out the fridge and drawers so the carpet would dry and not mold.  Then, after going door to door on the floor asking if anyone had a box fan and coming up empty-handed (who would have thought that there was a downfall to having air conditioning in our rooms??) we had to resort to using my tiny personal fan to take on the task of drying the carpet.  What a fiasco, but all’s well that ends well.

Some other reasons why I love college:

1. Some guys were doing hardcore parkour on campus.  I’m not even sure if that’s how you spell it, but what it is is guys doing jumps and flips and such off of buildings and trees and everything.  It was awesome.

2.  The wildlife here makes me feel like I’m in a zoo or something.  Besides the usual gray squirrels we find here, there are cute little chipmonks and the other day we saw a flippin’ hawk!  It was just perched on top of the railing of some stairs, and there were a bunch of students clustered around it taking pictures.  There was a dead rabbit on the ground off to the side too.  All of a sudden, the bird took flight, and Brooke screamed bloody murder and took off running, so convinced that it was coming after her.  What a sight.

3. People are just weird.  They just sit outside of the residence hall, doing homework and smoking hookah.  I’m just like, whaaaaa????

This is really hard to see, but it’s some kid with a hookah.  Awk.

4. I went to the Exponent (Purdue’s newspaper) callout and am seriously considering being a part of it because a) I loved working on the paper at West even though I hated it just as much, and b) You actually get paid to do it.  I just feel like I might not have enough time, but we’ll see.

5. I also went to a Catholic Bible study called Renew, which was pretty cool considering I’ve never been a part of such a group before.  So many opportunities here…

6. On Fridays, students have the opportunity to “Swipe out Hunger.”  If we have extra meal swipes, we can go to and On-The-Go location at one of the dining courts and instead of getting food, you swipe your card and money is donated to local or international hunger organizations.  It’s pretty neat, especially because I have 15 meal swipes a week and always have a ton left at the end of the week. (Always?? Who am I kidding, I’ve only been here a couple weeks.  I act like I’ve been here forever.)

7. We watched clips of The Lion King, my favorite Disney movie, in my Biology lecture today because we’re studying ecosystems and it related so perfectly.  My professor also likened the lecture hall the the Oprah studio when he was walking up and down the aisles.  Man, I love college. 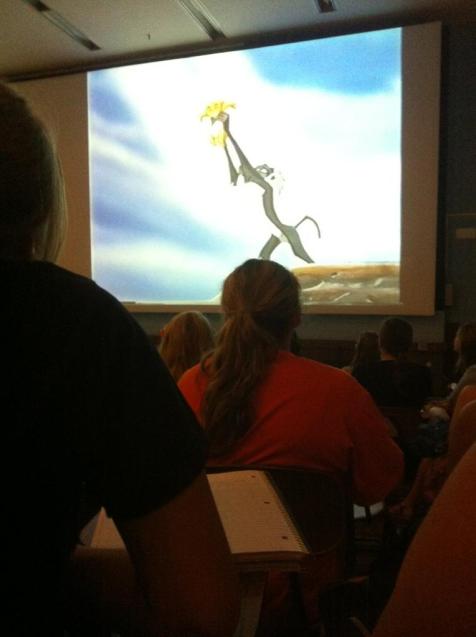 8. The brownies Brooke, Christian, and I made last week were a success!  The girls loved them and we took the leftovers to the 4th floor guys’ side to make some friends…because everyone always says a way to a man’s heart is through his stomach.  We’ll have boyfriends in no time…

Well, I won’t have much to report for this weekend because I’m going home to see mi familia!!  I can’t wait to see them all, though I do regret not being able to see the first game this weekend.  Oh well, there will be other games.  My mom will be here in about an hour to pick me up, and I’m totally procrastinating because I’m supposed to be packing, but this is 10x better.  Have a good Labor Day weekend everyone!

This was the sign outside my door…that some of the guys I met decided to defile.  Thanks, guys.

Brownie night!  The girls loved them!